This Thing About Community, And Why We Need It

Can I be honest? Groups scare me a little. Anything larger than my husband and I, and two other couples is just a bit out of my comfort zone. Even when our group of eight, all close and fun friends, gets together, the house is just a bit too loud. And that’s kind of funny because my husband and I, we love hospitality. Love hosting parties in our home, church get-togethers, fundraisers, whatever. And we’re pretty good at it, or so we’ve been told.

But give me a quiet room and a good book over a room full of people any day.

Yes, I’m an introvert. I’m not a big talker and I’m happy to sit and listen to others do that for me. Sometimes I’m not happy. Sometimes I’d rather be anywhere but there in that group. I like being alone.

That mindset is a little dangerous.

Dangerous? That’s a strong word. Yeah, it is. And here’s why.

Because pretty soon I may convince myself I don’t need anyone at all.

I don’t need to make more friends when all they do is up and leave after a few years. I don’t need to share what’s on my heart in a group, only to have the words come back to me in a question a few weeks later, from someone who wasn’t even there. I don’t need to take the risk of being hurt, of not being heard, and I certainly don’t need to feel misunderstood or ashamed.

These are real and valid feelings, and my experiences. And I’m grappling with them as our church steps into a new season. Because we’re starting up small groups – Agape Life Groups – we’re calling them. And honest? My first instinct is to press my back against the wall and pretend I’m not there. You all go on ahead, I’ll just hang out here for a bit. Which is going to be a little hard to do, since my husband and I are going to be facilitating one of these groups. Snort.

We’ve been going through a little book called Uncommon Community, and the first chapter makes this statement –

You are not an island.

And so the voices begin to shout.

Or do I? Relationship is a tricky thing, isn’t it? It really does require work. Sacrifice. Doing things you don’t want to do. We know this as spouses, as mothers and fathers and sons and daughters and siblings. And sometimes relationship hurts. Sometimes people walk away. Sometimes we do. Because it’s easier than getting hurt over and over again.

And then coming out of Easter, it hits me.

What if Jesus had walked away?

What if, in that garden, He’d given in to that thought of packing it all in? What if He’d peaced out and hopped the next plane to Hawaii?

Do I believe He loves me? If I do, then I must be lovable. Right? I must be worth something. If the God of the universe loves me, believes in me, intercedes for me, who doesn’t have it all together, who has doubts and questions and messes up on a daily basis . . .  ME? Good grief.

But I do believe that. I know it and I believe it and this is where my true identity lies. In Him. And that’s not something to be held onto tightly like a precious ring . . . that’s a love beyond comprehension. Isn’t it? And shouldn’t we want to be sharing that with each other?

One of my flimsy excuses for avoiding new relationships is the idea that I have nothing to offer. Nothing to bring to the table. We can talk ourselves into this one pretty easily. Because there’s Dapper Dan over there and he’s a college professor. And Cindy Lou, well, she’s got five kids and she runs a chain of clothing stores, and Lovely Lila gets up and leads worship every Sunday and she also speaks in front of hundreds of women and . . . so it goes. The comparison game. And I’m pretty good at it. But the sucky thing about playing that game is that eventually, if you’re not careful, you start to believe the lies. You start to believe things about yourself that aren’t true. And you have no-one to talk to because you think they’re all so together and so much better at life than you, and by this time you don’t trust anybody anymore anyway.

I remember my first writer’s conference like it was yesterday. A few hundred people all milling around, chatting and laughing like old friends, which many of them were. And I didn’t belong. What was I even doing here? Did I really think I was going to make it? Actually find an agent willing to even look at my stuff let alone offer representation? And seriously, getting published? Come on.

If I’d listened to those voices, I’d never have attended another conference. I would have walked away, given up my dreams, believed I wasn’t good enough. Believed what I had to offer was of little consequence compared to so many others there. But I went back the next year. And the next. And I reached out online. I made friends.

I took a leap of faith. Okay, it was a lot of leaps, but I held fast to the belief that this was the road God put me on. That this dream I had . . . it was His too. And He brought people into my life, time and time and time again, to confirm that. He’s still doing it. People to encourage me. To pray for me. To talk me down off the proverbial ledge I walk when things start going south and I forget who I am and where I’ve been. So I know what those kind of friendships mean. I know what it does to the soul to hear someone say, you got this, I believe in you. I love you.

And what a shame it would be if I never gave that back. If I never shared my experiences with someone who might be hurting, might be going through a similar season. Because you never know. People are good at hiding. Good at pretending. Ask me how I know.

Truth? It’s going to take a lot. For me personally, and for others too. But life is short and why spend it alone? So you just do it. You take that leap of faith and you go for it. And the thing is, once you dive in, you may find the water’s actually pretty nice.

Oh, there’s got to be freedom in that. 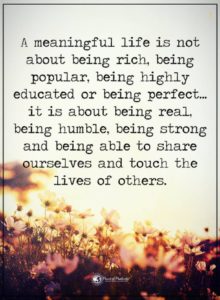