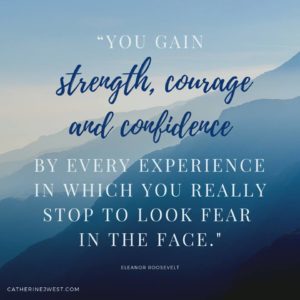 “You gain strength,courage and confidence by every experience in which you really stop to look fear in the face. You are able to say to yourself, ‘I have lived through this horror. I can take the next thing that comes along.’ You must do the thing you think you cannot do.”  — Eleanor Roosevelt.

So we survived Christmas. And we’re floating through those in between days before New Year’s, trying to sort it all out. Ignoring all the uber-inspiring ‘one word’ posts because who wants to get that deep, ignoring all the things we ate and drank and said over the holidays that we wish we hadn’t, ignoring all the things we didn’t do we wished we had. And now we’re facing down a brand new year and trying to muster just a little enthusiasm. Trying to find just a little hope in all the mess. But the end of the rope is fraying fast and we just don’t know . . .

Would you believe me?

You must do the thing you think you cannot do.

Think about it. Really.

Is your stomach knotting up a little? Tiny beads of perspiration suddenly dotting your forehead? Are you tempted to click away right now and go read something else? Look at pictures of puppies and kittens and goats?

I’ve known that feeling for a while. Probably a few years at least. That feeling that something’s gotta give. It’s been a struggle. I haven’t talked about it much. That internal battle that keeps me up nights. The constant nagging of not being good enough. Not doing enough. Just. Not.

What if you woke up one day and decided it’s time? Time to face that fear. Time to do the thing you think you cannot do. Time to tell the voices in your head to shut up and move on. Time for you to move on . . .

What if you actually could?

It’s hard, isn’t it? To scroll through social media day after day and see all those perfect people living their perfect lives. You know they’re not perfect, right? You know they’d be mortified if you learned their deepest darkest secrets. We’ve all got those and we work pretty hard to keep them hidden. But there is no such thing as perfect. It’s a crock we’ve been buying into from the time we could read. Remember how you stumbled over See Spot Run and Susie didn’t . . . she was so much better than you. Yes, it starts way back there.

Maybe this year, this brand new year that doesn’t have to be full of doom and gloom, maybe this year, you can be you. The you you’ve always wanted to be. I don’t know what that looks like or what’s prevented you from getting there. But I do know it can happen.

For me, my roadblock, well, one of them, has been confidence. Or lack of it.

I write books, novels about very imperfect people who somehow find hope. Sometimes they don’t. Because life isn’t always about happy endings. But anyway. Writing is hard work. Finding an appreciative audience is even harder. It’s years and years of hard work that ultimately culminates in what people think. They’re either going to like the things I write or they’re not. And if they don’t . . . when they don’t . . . when this thing you love doing doesn’t quite seem to hit the mark you thought it would . . . that crash can hurt. Leave bruises. And it gets harder and harder to get back up. And easier and easier to crawl into that comfy hobbit hole and stay down there. Where it’s safe.

Sooner or later you’ve got to come out for air.

What is that thing you think you cannot do?

And how much do you want it?

My story isn’t going to be the same as yours. I went after that thing and I got it, and I’m still trying to figure out if it was worth it. Most days I think it was. Okay, it was. But it wasn’t easy. Isn’t easy.

What I have finally learned, is this – I can’t please everyone. I think I thought I could and maybe that was part of the problem. Still, this writing thing is who I am, I’m kind of stuck with it. It’s not something that should drag me down. Deciding not to let it, not to worry about the next step or how my words are received, well, there’s freedom in that.

I had a bit of a personal epiphany a few months back. So I’m going into this new year with a perspective I may not have had prior to that moment. I have renewed faith in myself. Still a work in progress, but I’m doing the thing, a few things actually, that scared me the most. And so far? I’m succeeding. I’m meeting my personal goals, and I’ve got another completed manuscript that one of these days I’ll be brave enough to release into my agent’s hands and see what happens. I’m still fighting fear, but I’m facing it.

Those so called perfect people who aren’t really perfect? Well, their opinion is a little less important than it used to be. I’m slowly building my self-confidence back up. Breaking the radio silence on this blog is one of the ways I’m doing that. Believing that what I have to say might just land in some space where somebody needs to know what I know.

They say you’ve got to find your tribe and learn to speak their language. Or something like that. I’ve always been a little intimidated by crowds, so the word ‘tribe’ eh, yeah, kind of scares me. But I can’t do this life thing alone. We’re not meant to. Even if it’s tempting to hide away, sooner or later you’ll get tired of your own company.

So I’ll set the table again, and see if anyone sits.