Hidden In The Heart, A Love Story

I’m just back from Nicaragua, which I’ll tell you all about at a later date. But while I was away, my second novel re-released, so I thought I’d share that excitement with you today! 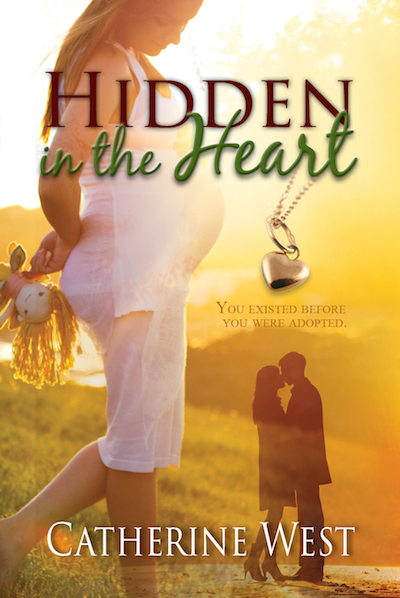 Hidden in the Heart is loosely based on my own search and reunion journey, and it means a lot to me, so I’m thrilled to have it available to readers again! I hope you’ll enjoy it. Since you may be curious about my own adoption story, here’s the gist, taken from my website. I love to talk about my experience, so feel free to ask any questions! In this season of reflection and thanksgiving and hope, I’m mindful of all the blessings I’ve been given.

I can’t remember ever not knowing that I was adopted. I had a wonderful upbringing, two loving parents, and I really lacked for nothing. Except answers. Like most adoptees, growing up I would stare at my image in the mirror and wonder…whose nose did I have? Where did my brown eyes come from? Little things that most people take for granted, or maybe never even think about.

My parents would talk to me about my adoption, but I always felt a great sense of guilt whenever I asked them anything, like I was betraying them in some way by wanting to know. Because of that, I ignored my curiosity. I even convinced myself I didn’t really want to know. Didn’t need to know.

All that changed in January of 2001. I still can’t say exactly how or why it happened, but I suddenly knew I had to get the answers to the questions I’d been asking my whole life. And I wouldn’t be able to rest until I had them.

The entire concept was utterly terrifying.

The first thing I did was talk to God. I knew that if this was not from Him, but just my own human curiosity finally getting the better of me, that He’d let me know. My prayer was that if this was not His will, all doors would remain closed, and that I would be able to accept that and know it was not meant to be.

The second thing I did was talk to my Dad. That was probably one of the hardest things I’ve ever done. I was so nervous I thought I might throw up. I was scared of hurting him. I was scared he’d be angry. I was sacred he might actually know something I didn’t.

I needn’t have worried. Because one thing I’ve always been sure of is how much my Dad loves me. He proved that again by offering his unconditional love and support. The day after our conversation, he presented me with my adoption papers.

To this day we don’t understand it, but there on the yellowed typed out sheets of paper, was the full name of my birth mother. Back in the ‘60’s when I was born, all adoptions were closed. No names were ever supposed to be released to either party.

But there it was.

As strange as it sounds, holding those documents in my hand gave me a sense of validation. I came from somewhere. Someone. And she had a name.

I was stunned. All air left my lungs. My heart pounded. For a moment, all I could do was stare, and wonder.

My search had begun.

I began my research online, joined a few Adoption Registries, and discovered some wonderful support groups. Within a couple of days, people I didn’t even know were helping find clues as to where my birth mother might now be located. Within a week, going on information I had about her, I was pretty sure I had found the right person.

I’m really not a phone person. I debated making the call that would change the course of both of our lives, but in the end I chickened out and opted to send her a letter instead. I’m sure I lost my mind several times over in the weeks it took for her to respond. Finally convinced that my letter had gotten lost somewhere over the Atlantic, I summoned courage and sent an email to the woman I believed to be my birth mother.

She responded. At first I was beyond thrilled to see that email appear in my Inbox, but as I read it several times over, I realized that this might not go the way I’d hoped. I wish I could tell you that within hours we began making plans to meet, but that was not the case. She was hesitant, not overly friendly, but yet the door was opened just a crack. And I was determined to crash through it.

Be Careful What You Pray For…

My birth mother and I corresponded for a year via email. No phone calls. No plans to meet. Not even a picture of her. Our conversations mostly revolved around the weather and her dogs. Being the sentimental pushover that I am, I had no qualms about sharing my life with her. Somehow it never dawned on me that she might not be all that interested.

I quickly figured out that I was a secret she intended to keep and carry with her to the grave. And I’m sorry to say that there were times when I ignored God’s warnings and went ahead and did my own things to change that. I was desperate for answers and she was the only one who could give them to me. But I was running up against brick walls, shaking chains securely bound with padlocks rusted with age.

By the end of that year I was an emotional wreck and my friends and family were begging me to cut contact with her and give it up. But I couldn’t. I knew somehow, that there was a reason for all this. I was determined to find it.

In a surprising turn of events, my birth mother suddenly gave me some family information that led to a startling discovery. I had a sister. I was so excited! Growing up as an only child, I’d longed for a sibling. And now I had one.

She had no idea I existed.

Suffice to say things went from bad to worse in my relationship with my birth mother after that. She was running scared now, afraid that I would contact my sister and blow her out of the water. I could have. I wanted to. It’s probably fair to say I have never wanted anything more fiercely in my life. I didn’t know whether my sister would want to know me, but I firmly believed she had the right to know. But again, after praying things over and receiving good Godly counsel, I knew deep down that I needed to wait.

I am not a patient person. Not taking action just about killed me. I repeatedly asked my birth mother when she would tell my sister about me. She said not yet. Months passed. When I couldn’t stand it anymore, I acted on impulse and sent a cryptic letter to my sister, sure that my birth mother would have said something by now. Of course she hadn’t, but I didn’t know that. In a moment of desperate prayer, I distinctly heard three words. Let it go. I knew then that I had to cut my losses and release my vice grip on the entire situation.

Reluctant obedience. That’s what I did over the next few months after accepting that for whatever reason, the doors were now closed on my search. Any thoughts of a possible reunion between me and my birth mother or sister were now just shattered dreams.

Still, I had to believe that God works all things together for good. I didn’t understand it. There were days when I was angry, days when I questioned why I ever bothered to search in the first place, but in my grief, I grew closer to Him.

And then one day, I sat down at my computer, checked my email, and screamed.

There was an email from my sister.

I didn’t even need to read it to know I was sitting in the middle of a miracle. The subject header read, Communication At Last.

This coming year, my sister and I will celebrate twelve years of being sisters. I have traveled to visit her many times and each time I get in the car and we head toward the place I came from, it feels like coming home. I can’t explain it. It just is.

About a year after our first meeting, I was given the gift of being able to meet my birth mother. It was another weekend of miracles, and I will be forever grateful to God for orchestrating the events that took place over those three days. She passed away five months later, but I believe we both found the peace and healing we needed.

My sister and I know without a doubt that God had planned our reunion long before either of us knew of the other’s existence. It has been a powerful testimony in our lives, and in the lives of others. There are so many details that I can’t share here, but I will close with this thought.

God knows. He knows what you need, when you need it, and He will provide.

Do you know this? I’d love to hear your story.